During the growing national response to the coronavirus in the United States and around the world, on behalf of all of us at CavanKerry Press, The Waiting Room Reader, Volumes I and II are now available to you for free!

The WRR was co-sponsored and co-conceived by CavanKerry and LaurelBooks partner, The Arnold P. Gold Foundation for Humanism in Medicine. Publisher Joan Cusack Handler and Gold Foundation President and CEO Sandra Gold observed that patients, while waiting to learn about their physical health, were typically provided only pop culture magazines. While perhaps entertaining, this media was without the solace and comfort that literature provides.

These books are designed to address that need by bringing fine and accessible writing to “keep the patients company.”

Here are uplifting and inspiring poems that focus on life’s gifts – everyday pleasures: love and family, food and home, work and play, dreams and the earth.

We are proud to offer this collection, originally offered only to hospitals and physicians’ waiting rooms, to the wider public to ease the strain of quarantine and isolation throughout the duration of the coronavirus outbreak. 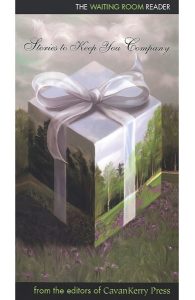 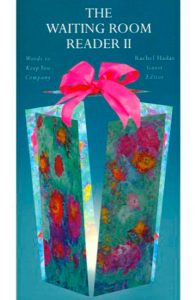 I hate milk chocolate, don’t want clouds
of cream diluting the dark night sky,
don’t want pralines or raisins, rubble
in this smooth plateau. I like my coffee
black, my beer from Germany, wine
from Burgundy, the darker, the better.
I like my heroes complicated and brooding,
James Dean in oiled leather, leaning
on a motorcycle. You know the color.

Oh, chocolate! From the spice bazaars
of Africa, hulled in mills, beaten,
pressed in bars. The cold slab of a cave’s
interior, when all the stars
have gone to sleep.

Chocolate strolls up to the microphone
and plays jazz at midnight, the low slow
notes of a bass clarinet. Chocolate saunters
down the runway, slouches in quaint
boutiques; its style is je ne sais quoi.
Chocolate stays up late and gambles,
likes roulette. Always bets
on the noir.

HOW TO FALL IN LOVE WITH YOUR FATHER

Put your hands beneath his armpits, bend your knees,
wait for the clasp of his thinning arms; the best lock
cheek to cheek. Move slow. Do not, right now,

recall the shapes he traced yesterday
on your back, moments before being wheeled to surgery.
Do not pretend the anxious calligraphy of touch
was sign beyond some unspeakable animal stammer. Do not

go back further into the landscape of silence you both
tended, with body and breath, until it nearly obscured all
but the genetic gravity between you.

And do not imagine wind now blowing that landscape
into a river which spills into a sea. Because it doesn’t.
That’s not this love poem. In this love poem
the son trains himself to the task at hand,
which is simple, which is, finally, the only task
he has ever had, which is lifting
the father to his feet.

On the day of your scan I make a soup
to wean us from meat. Beans soak and blanch
an hour while I slit open the cell-
ophane wrap on the celery, chopping
the ribs into small pieces, the size
of the stones that follow an avalanche.
Carrots sliced into see-through orange mem-
branes, others hacked into jagged boulders, bi-
sected as though by the pressure of shift-
ing plates. Onions at knife point, suppurate
and toss themselves into the hot oil. What
is left? two blind see-no-evil potatoes.
Sweet herbs: I pull apart ovate leaves
of basil and sweet marjoram. Red kidney
beans slip out of their bladder skins, rubbing
against the Great Limas. Together,
they give off a kind of scum which keeps down
the foaming boil; instead it heaves and
swells, trembling like a bosom but does not
spill out. Thank God for scum! I rinse my knife,
watching its gleaming edge rotate under
the water; now there is only the wait.

WHY I DON’T DRIVE A NEW CAR

On the spring nights we drove them home
our first cars were beautiful:
sprung seats padded with greasy pillows,
chrome corroded, dings as endearing as freckles
and, when we leaned on the horns,
nasal bleats, foggy duck calls, or low and solemn farts.
We named our first cars:
Perdita, Joe Pickle, The Mermaid.
We had so many places we wanted to go.

Some mornings, when we weren’t home
but waking up,
the sight of our cars from a second-story window
was all that we had to lash us to the earth.
When one of our cars was broken
our friends roamed the terrible cities
to find us in front of our houses, waving frantic,
and took us into their cars,
safe between their laundry and their lovers.

And what was as pretty as young, unbreakable bodies
tumbling from old Volkswagens at Sandy Hook?
And, if a parent died, what rich consolation
we felt at the sight of a dozen or so of us
spilling like clowns from a Day-Glo painted Valiant.
No, I don’t need to be nagged to buckle my belt
in a voice as cold and fake as a Burger King milkshake.

Here’s to a car that a pal can puke Southern Comfort in!
Here’s to a car with a creamed corn can for a muffler!
Here’s to the discontinued and disenfranchised,
longing for those parts no longer available.
I’ll drive my rusting bones in a clamoring wreck,
a car like our first cars,
the cars that we loved
when we thought that we knew where it was
we wanted to go.

My Mother Had Red Hair

I’m out driving with my friends.
We’re driving down US 1 from Russian River.
We’ve been to several wineries
and I’ve had six great wines
and several bad wines.
It’s a beautiful day in a beautiful land.
The red wine I can’t taste
because I’ve lost my sense of smell.
Then, at one winery, we’re offered a Shiraz
That’s so rich and deep,
it explodes in my nose and mouth
and my head and I lean back and say
thank you.
Thank you for this wine,
for this day with my friends,
and then we leave.
So right here you’d think it all ends and
you’d be wrong.
Because right here it begins.
We drive down through the valley
and it’s not all that impressive.
Then we wheel out to the coast
and God says,
take a look chump.
It’s spread out all around.
Glory.
Like you’d never expect.
Sheer cliffs, sun glinting off beaches no one
should ever see.