Florida’s just a thumb on a jigsaw puzzle,
but under water the Weeki Watchee Mermaids
pour their tea, cook, exercise, iron clothes, guzzle
with muscular skill their Grapette soda
with only occasional surreptitious sucks
on an air hose hidden in shell-studded scenery.
They grin, open eyes afloat in their blue-lit skulls.
Holding my breath was a skill I practiced, too,
like when I was ten years old and woke to a body
lowering onto my body, and a breath that put me in mind
of a rotten leg, a thing I’d seen in a book once
and which scared me, but not as much as this body
on top of my body, these jabbing fingers. I was wildly aware
that the room I was in was a pigsty, and I was a pig to be sleeping
in my clothes, and I wanted to blame it on someone, which
would have meant speaking, which I could not do—
it would have been too real—and I was too old to blame anyone
anyway. I closed my eyes to make the black world
blacker. The lamp was within my reach, and a railroad spike
I could easily have lifted, and also a bowling ball I’d found
on the tracks, but all I could think of was being ashamed
and dirty, and grateful the whole thing was happening
in black and white, like those mermaids on TV, their lips
and nails a black I knew was red, their long white legs
safely fused in their glistening tails.

See her small clothes drop in the blooming weeds—
t-shirt and shorts in the upraised arms of the yarrow.
Her arms are upraised, too—she exults or prays—
she’s narrow and flat, she’s white as Queen Anne’s Lace.
The thatchy back of her head is a patch of knots,
her teeth are rotted, but, then, so are theirs, bared
as the boys reach to touch her, not unkindly.
They are sixteen and she is half their age. Above them
a star goes dark, or many darken—the maple completes
the ring at its very heart. She feels like the pinecone seed
that split the boulder, the bullet exploding the head
of the president: once invisible, once inconsequential,
now singular, at last in her rightful place. 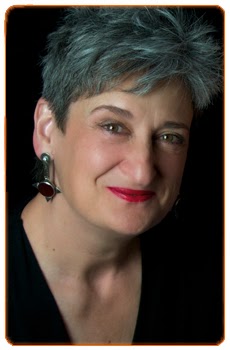 Catherine Doty is the author of a book of poems, Momentum (CavanKerry Press), and a collection of cartoons, Just Kidding (Avocet Press). Her work has appeared in numerous magazines and anthologies, among them Garrison Keillor’s More Good Poems for Hard Times and Billy Collins’ 180 More: Extraordinary Poems for Every Day. She is the recipient of a Marjorie J. Wilson Award, an Academy of American Poets Prize, and fellowships from the National Endowment for the Arts, the New Jersey State Council on the Arts, and the New York Foundation for the Arts. Ms. Doty has worked as a visiting artist for the Frost Place, the New York Public Library, and other organizations.